Selected from 400 entries covering more than 50 sports, GAME Lebanon was one of 35 organizations which represented the most diverse range of sports, countries and social issues received by the Beyond Sport organization to date. 12 awards were handed out on the inspirational award night in a celebration of how sport can help tackle some of the most pressing social issues in the world today.

The Innovation & Tech Award went to GAME Lebanon represented by its Country Director Ibrahim Hourani with the campaign ‘Looking for a Place to Dream’.  The win goes to Lebanon and GAME’s awesome Playmakers, trainers and volunteers who were engaged in developing the campaign and the app ‘GAME Dream’. 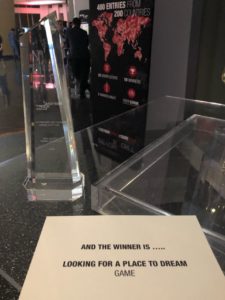 The Campaign ‘Looking For A Place To Dream’

The goal of the campaign ‘Looking For A Place To Dream’ is to create awareness about the lack of places to play sports in Lebanon. A variety of initiatives developed by GAME’s young volunteers have been rolled out targeting this aim.

In October 2017, GAME Lebanon launched the campaign ’Looking for a Place to Dream’, which aims at getting the youth active again by identifying potential public spaces for sports.

The lack of accessible playgrounds and public space in Lebanon creates a democratic challenge, as public spaces are viable places for a diverse population to meet across differences. Furthermore, obesity increasingly constitutes another problem in Lebanon as its levels continue to rise. One way to stop the escalating obesity is to facilitate free weekly sports activities making children and young people more active. In order to do so, more public spaces for sports need to be established.

A ‘GAME Dream’ app has been launched, which engages the youth in the cause. The app lets the user customize photos of unused locations in the city, decorate the pictures with sports emoji’s and share them on the Facebook campaign page. The hope is that one day some of the visualizations will be turned into actual places where people can meet and play sports.

Read more about the campaign here.